With a sense of smell that is 10,000 to 100,000 times more acute than humans’, dogs can be used in different roles within global humanitarian mine action programmes – including as an Animal Detection System (ADS). ADS units are most suitable for operations in areas with low concentrations of Explosive Ordnance contamination (or low-threat areas).

Who are Project Masam’s explosives detection dogs, and just how integral to the humanitarian mine action programme are they?

Project Masam currently deploys seven Explosives Detection Dogs (EDD) in Marib, in the east of Yemen. The dogs – three Belgian Malinois and four German Shepherds – are all between five and six years old. 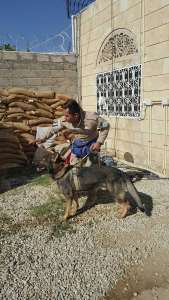 EDD Team Leader Adel Briones told Project Masam Belgian Malinois are prized as military dogs and are valued for their natural intelligence and aptitude for operational activities from drug-sniffing and bomb-detection, to search and rescue.

German Shepherd dogs are generally considered dogkind’s finest all-purpose worker, the Team Leader added. The German Shepherd breed is marked by a willingness to learn and an eagerness to have a purpose. They are curious, which makes them excellent guard dogs and suitable for search missions. German Shepherds in general are calm, assertive, assured, confident, hyper-intelligent, powerful, very loyal, and affectionate dogs.

“All Masam EDD Dogs are non-aggressive and are very friendly – that is why the Yemeni kids like interaction with our dogs,” Briones, who has been working with Masam since 2018, said.

Training in an active warzone

During EDD training the dog handlers use Scentlogix K9 scent training products – kits that simulate the odour of explosives.

“What we do is to bridge the gap of what is really happening in real situations and incorporate that into our training scenarios,” Briones said.

“It is critical to broaden the world of detection and what we have here in EDD Project Masam is our experience in an active warzone and in a hostile environment. Therefore, in training, we need to ‘Adapt and Evolve’ in daily continuous training. Some K9 trainers would say always think outside the box, but we at Project Masam are thinking that there is no box, so we aim to master all possible situations.”

Mitigating against the threat of explosives

The role of Project Masam EDD is mainly focused on property safety and protection as well as confirming “explosives-free” access control measures for vehicles and persons. 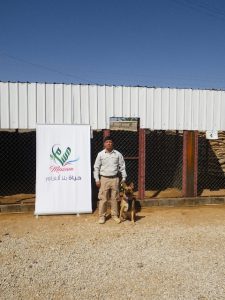 Other Animal Detection Units may be deployed as a part of an integrated clearance approach in combination with another asset such as manual clearance demining teams.

Once fully trained, Masam’s EDD team conducts two perimeter patrols every day, once in the morning and once in the afternoon/evening.

Apart from perimeter searches the EDD team also carries area searching of the Project training area and conducts vehicle and baggage searches, does visual observation during perimeter searches for indications of suspicious packages, Improvised Explosive Devices (IEDs), or any “out of the ordinary” foreign material that may have been placed.

The dogs are trained to stop and sit for their handler when and where they have spotted the smell of explosives, weapons and improvised explosive devices.

The relationship between a handler and his, or her dog providing security in the most difficult of environments is one of absolute trust.

“Dogs do speak, but only those who know how to listen to them will understand them,” Briones said.

The EDD handlers assigned to Project Masam have a combined total of 99 years’ experience in both Private and Humanitarian theatres of operations.

“The EDD Handlers here in Project Masam are all experienced handlers and we are the few EDD Mission Handler’s selected and qualified to work for ISAF [NATO’s International Security Assistance Force in in Afghanistan], attached to their Combat Engineer/Battle Group’s conducting missions in Kandahar, and all other hostile areas in Afghanistan,” Briones explained.

“We have a lot of fond memories and still making memories with our Masam EDDs,” Briones said, recalling an amusing anecdote involving EDD Maca, a female Belgian Malinois. “She loves to play and catching a Frisbee in the air. One time while we were enjoying some playtime, one of our Technical Advisor was flying a drone about 10 feet [3m] high. EDD Maca was observing this and decided to run and jumped to catch this strange Frisbee. Needless to say, she never caught it but until this day she always looks at the drone wondering ‘when is this frisbee going to come down so I can catch it?’”

In July, Masam announced the renewal of its life-saving operation clearing landmines, unexploded ordnance (UXO) and improvised explosive devices (IEDs) throughout the liberated areas of Yemen for a fourth year.

This article was first published on Medium.

Project Masam condemns use of ‘larger than ever seen’ landmines in Shabwah
January 11, 2022

Masam's #Aden and #Marib teams removed, cleared or destroyed 6,179 #landmines and unexploded ordnance #UXO in a week across liberated areas in #Yemen.

@MinesInYemen stated that units of the naval formation in the 5th Military Region had found 8 naval mines deployed by #Houthis in Yemeni waters in the Red Sea off Hajjah Governorate, northwest of ... Yemen.
@OCHAYemen
@Masam_ENG
#YemenCantWait