Regardless of the rainy season and security issues linked to tribal clashes in Yemen’s West Coast region, Project Masam clearance teams are continuing to undertake mine clearance operations to the best of their ability by adapting to new threats.

The weather in Yemen varies on geography. Yemen’s western highlands have two distinct rainy seasons – the saif which runs between April and May and the kharif which brings torrential rains and flooding from June to September.

During rainy season, demining teams and civilians alike face the issue of Mine Migration. A migrating landmine is a mine moved by nature from the original position it was laid in to another, without any human intervention. 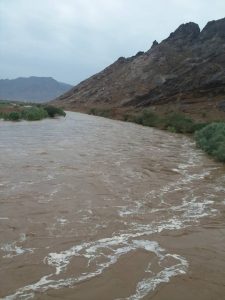 “Mine clearance teams are more vigilant due to landmines migrating caused by the water shifting the mines: this means that water can transport a mine from high ground (mountainous terrain for example) to low ground during floods (such as flooded rivers beds),” demining expert Training Officer Deon von Landsberg told Masam from Aden.

Because landmines can be transported by a flooded river anywhere from several meters to dozens of kilometres, the clearance area can easily enlarge exponentially if landmines are washed down from existing and confirmed mined sites.

Recently, Masam Team 11, were tasked to do clearance where a camel had stepped on a mine in a river bed. The mines were found in very close proximity in a “collection” point in the river, clearly indicating that the mines had been washed down from their original point of being laid.

“During rainy season, clearance teams have to verify all their clearance areas as well as access routes to the minefields for possible mine migration especially when the clearance operations are in low ground, such as valleys below mountainous areas close to rivers that can be flooded,” Von Landsberg added.

Speaking from Aden, a Masam IED Threat Officer said: “The biggest danger is that previously cleared and landmine-free areas are now again contaminated, and therefore will need re-clearance. This is very time consuming as can be imagined. Flooding can cause marking systems to be washed away, remove all evidence of cleared areas, and all access routes to and from Dangerous Areas (DAs) will need to be re-cleared in order to ensure safe passage to and from mine sites.”

For deminers, this also means extending their time spent on site to ensure the threat is removed.

In Yemen, there are tens of thousands – if not more – of Houthi anti-vehicle devices (AV, also known as anti-tank mines) in the ground today. 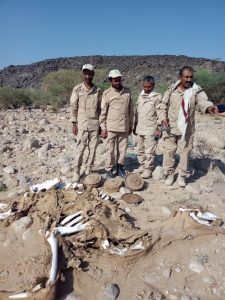 The longer they remain exposed to the elements, especially flooding, the more they will deteriorate and transition into anti-personnel (AP) threats. Whilst a normal AV device requires an applied pressure of more than 150kg (330lb) in order to detonate, a deteriorated AV may detonate under about 5kg to 50kg (11lb to 110lb) of pressure.

The IED Threat Officer recalled an accident in which a Masam deminer in his fifties, which we will name A.A.K, was killed in Taiz Governorate on 7 April 2020.

“It was in a Wadi [river] bed that A.A.K was killed because the AV devices there were periodically washed with flood water. Flood water had rapidly corroded the casing and turned a Houthi improvised AV device into an AP threat by destroying its structural integrity.”

According to the Incident Report, A.A.K’s demining team had located three anti-tank mines. Having approached one of them, A.A.K was hit directly on the right leg, which was amputated by the blast, and the fragmentation effect drove metal fragments on his left leg and many places on his body. A.A.K succumbed to his injuries.

A Confirmed Hazardous Area, the site was immediately treated as a High-Risk Area due to the deterioration of the AV mines present in the ground. The teams were re-trained immediately on this type of deteriorated AV threat after the accident.

Masam adapts to the seasonal threat

The IED Threat Officer, who wishes not to be named, explained rainy season affects freedom of movement of the teams. “Flash flooding can put certain minefields out-of-bounds and restricts our potential movement to the field.” 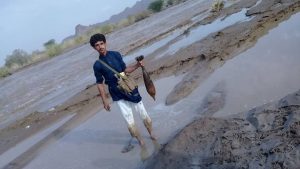 Vehicles may get stuck in the mud, effectively delaying clearance operations as well as compounding security threats depending on the area in which the teams operate should they remain too long in exposed areas that still carry risks. Other threats include deminers slipping on wet ground and falling into uncleared areas, and wet conditions impairing the vision of a deminer in the clearance lane.

“Deminers cannot do mine clearance when it rains, and they obviously must wait for the rain to stop and the ground conditions to dry out satisfactorily for them to commence safely with clearance operations,” Von Landsberg added.

Masam Team clears dozens of landmines in Dhubab district in one week
December 8, 2021