Landmines left behind: What happens when Houthi militias retreat

As Swedish diplomat Hans Grundberg was appointed as the new UN Special Envoy for Yemen on 6 August, effectively supporting the international and regional efforts on achieving the political settlement in Yemen, Project Masam continues to witness a trail of landmines planted by the Houthi militias as they retreat from areas in Al-Jawf province.

Fighting has been ongoing in several provinces including in the governorate of Al-Jawf, in the east of the country. Early August, Yemeni army forces stopped a Houthi attack on army positions in the Jadafer front (east of Al-Jawf) forcing the militia to retreat.

In these newly-liberated areas, Masam teams are finding newly-laid mine fields. In the last week of July, Masam’s Team 11 led by Saleh Naser Toreeq was tasked with emergency clearance of areas from which Houthis had recently been repelled. 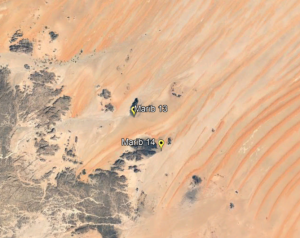 Over the week, the team safely removed a staggering 163 anti-tank mines, one anti-personnel mine and 70 unexploded ordnances (UXO) in the mainly desert area located approximately 145km north of Marib city (see satellite image).

“The deadly items were located in the surrounding areas of former Houthi strongholds,” a Technical Advisor, who asked to remain anonymous, said from Marib.

As part of Masam’s Standard Operating Procedure search methodology, the teams survey and investigate any suspected areas – post conflict. In other areas, civilians are encouraged to report dangerous items to Masam.

“In this case, the locations of the former Houthi strongholds in the mountains became known due to past battles, and thus reported as areas of conflict,” the Technical Advisor explained.

Clearing a patch for the future

This area is not yet fully cleared and Masam Clearance Operations are still ongoing.

“This is not a populated area and the closest inhabited village or city is located approximately 127km (78.9mi) North-West. However, it is quite possible that Bedouins may travel through these areas in the future,” the Technical Adviser said.

Bedouins are nomadic tribes and families that are known to be camel and/or goat herders and therefore move around frequently as grazing and water becomes less available. Demining liberated land, even currently inhabited, is integral to Masam’s clearance work – no land should be left unsafe.

“What we find and destroy today has saved a life tomorrow,” the advisor added.

As of 8 August, the Survey Team is continuing with survey operations of suspect hazardous areas in Al-Jawf while Team 11 has now relocated for clearance operations near Marib city.