So far since mid-2018, Project Masam has cleared 6,081 Improvised Explosive Devices, known as IEDs across Yemen. IEDs can come in many forms, with the most sophisticated ones assembled to cause huge damage and fatalities.

Unfortunately, there has been a rise in IED ‘attacks’ across Yemen, due to Houthi militias’ growing use of homemade IEDs, some of which are disguised as common household appliances, rocks or tree trunks.

So, which IEDs are Masam teams currently finding across liberated Yemeni areas, and how do the teams ensure civilians are kept safe from harm?

The term IED indicates that these are not Conventional manufactured mines, munitions or devices. The devices can be constructed by using general day-to-day materials available in hardware stores and supermarkets, however the Houthi militias also have a steady supply of IED materials and components being imported into Yemen from overseas.

Many household industrial chemicals and fertilisers, that are freely available in markets when processed in a certain way and mixed together will result in an end-product of “homemade explosives”. Conventional explosive ordnance, fuses, ignitor assemblies and mechanisms are imitated and copied to produce improvised “homemade” versions.

Last week, Masam’s Team 6 was deployed to a location approximately 12km (7.5mi) from Ataq city in Shabwah Governorate, where local security forces had reported an IED next to the road. 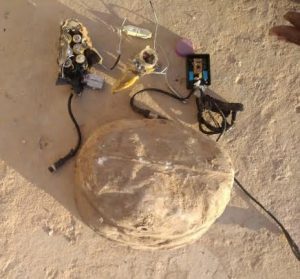 “It was an improvised directional fragmentation IED (referred to in Conventional terms as a Claymore type mine) concealed within a fibreglass mould simulating a natural rock for concealment and camouflage. The particular IED contained approximately 2kg of explosives and hundreds of metal fragments,” one of Project Masam’s Technical Advisors said from Masam’s Marib headquarters.

“Because IEDs are fabricated in various sizes and shapes, some contain much larger explosive payloads, which are designed to inflict the maximum damage to the intended target, be it personnel, vehicles or infrastructure.”

Team 6 reported this specific device was sophisticated, as it was fitted with a Passive Infra-Red (PIR) sensor connected to a basic electrical radio-controlled arming circuit.

Any movement in front of the device that would be detected by the infra-red sensor, or any disturbance of the device itself, will have triggered the electronic circuit sending an electrical current to the detonator, which will detonate the fragmentation charge.

“If not found and reported by the local security forces, and removed by Masam teams, this would have posed a grave danger and most definitely resulted in injury and fatalities of people and livestock should they have triggered the device,” the Technical Advisor said.

In accordance with the five pillars of Mine Action, Project Masam carries out Mine Risk Education across communities to reduce the risk of injury or loss of life from mines, IEDs and unexploded ordnance.

“The most important factor that needs to be conveyed to the local community is that they should never approach any item that they are not familiar with,” the Technical Advisor added. 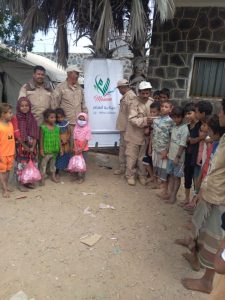 “This is especially with children, who are in nature very curious. Unfortunately the main reason for most injuries to younger people is their curiosity. Our teams encourage them to ‘always keep a safe distance from any suspicious or unfamiliar objects and report it immediately to the nearest security forces or civil defence units’.”

Masam Field Operatives are trained specialists and have undergone years of training in all categories and types of Explosive Ordnance whether Commercial or Improvised. Masam teams are evaluated and tested regularly to ensure that they are familiar with all/any new development of Explosive items.

Since Masam first entered Yemen in June 2018, it has cleared 25,168,541sqm of Yemeni land, effectively locating and destroying a total of 266,452 deadly explosive devices.

This article was first published on Medium.